Go to the Skeet User Group and become a member.  Get E-Blasts, communicate with other members and check tournament results.

Many people refer to shooting a clay target as “shooting skeet.” It isn’t. Skeet is a clay target game. Skeet was invented by Charles Davis of Andover, Massachusetts in 1920. An avid grouse hunter, Davis wanted a game that offered a greater variety of target presentations than Trap. He originally called it “Clock Shooting” because there was one machine at the 12 o’clock  position that threw targets and the stations were arranged in a circle around it. In 1923, William Foster came up with the idea of a second machine at the 6 o’clock position and eliminating half of the stations.
In Skeet, a shooter will attempt to break 25 clay pigeons or clay targets. There are eight shooting stations and a squad of shooters move from one station to the next. Targets are thrown by two machines. The machine on the left side of the field is ten feet off the ground. It is called the “high house.” The machine on the right side of the field is three feet off the ground. It is the “low house.”
Slow Motion Skeet Doubles Video by Joe Dimalanta 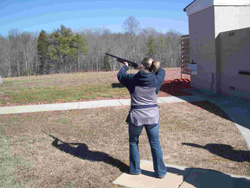 The stations are arranged in a semi-circle between the houses. Targets fly the same path every time, but as shooters move from one station to the next, the angles of the shots change. The shooter will shoot one target from the high house and then one from the low house at each station. On half of the stations, the shooter will then shoot a double. This is two targets, one from each house, thrown simultaneously.  Some shots are easier and some are harder depending on the angles. A shooter’s score is the number of targets he or she breaks.
The Club has two dedicated Skeet fields, Fields 3 and 4. Field 3 is for members and conditional members only. Additionally, Field 2 is a combination field that can be used for Skeet or Trap. 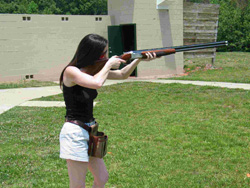 In Skeet, shooters normally use semi-automatic shotguns or double barrel guns (either over and under or side-by-side). This is because of the need to fire a second shot quickly when shooting a double. Skeet is a short range game, with targets no more than 23 yards away. For this reason, so “open chokes” on the shotgun are useful. Cylinder or Skeet chokes are normally used.

Skeet is regulated by the National Skeet Shooting Association. It sponsors registered matches in which competitors will shoot 400 targets using shotguns in four different gauges – 12, 20, 28, and 410. The NSSA classifies skeet shooters on a scale of AAA through D, based upon scores at registered matches. A shooter gets classified in each gauge and may be an A class shooter in one gauge and C class shooter in another. It means that when a skeet shooter competes in a registered match, he or she will be competing against shooters of like ability. Prizes are awarded to the winners in each class.
CRPC does not host any registered shoots because we do not have enough skeet fields. Most of us are recreational shooters and just out for fun, although some of our members compete regionally. The Skeet Program has at least one skeet league a year and several fun competition events during the year. Skeet leagues, fun shoots, and club competition events are open only to members and conditional members. 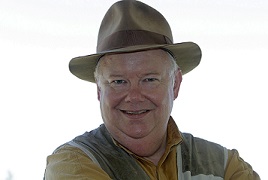